Sangeeta Deepam | The light of music

Sangeeta Deepam| The light of music

In our global fight against the pandemic, expressing solidarity and collective spirit through music. Didn't expect this to feel quite so real! Thanks to over 50 participants who joined us from across the globe to encourage this cross-border experiment where musicians in the US and India collaborated over zoom. We will work on the technical audio-visual aspects to improve upon the experience. May everyone experience joy, May all be free of illness May everybody see goodness, May no one have to suffer ॐOm, peace, peace, peace Artists in the US: Keerthi Madapusi Pera: Carnatic Vocal Srinivas Reddy & Nitin Mitta: Hindustani Instrumental Artists in India: Rajiv and Soham Bhatt: Tabla duet

As we continue our efforts to curb the COVID-19 pandemic through social distancing, this is an experiment in remote collaboration through music. The power of music and technology to connect, collaborate and spread happiness! Four guru-bhais (students of Pandit Nakul Mishra) recorded their pieces of the famous Beneras gharana Kaida (Dhiga Dhina Tirakit Dhina) at their time and place, several miles apart. The underlying connection was teentaal (16-beats), 110 bpm tempo, Scale C#, and nagma in Charukeshi. Music4Society hopes this concept spreads and such music collaborations increase across borders.

Artists: Rajiv, Soham, Keyur, Ajay
Posted by Rajiv S. Bhatt at 11:03 AM No comments: Links to this post

Few glimpses and demonstrations of the rich Tabla repertoire!

Theka is probably the most essential but highly underrated aspect of Tabla.
Theka is like a sutra, a thread, that comprises of minimal yet essential Tabla syllabi which provide form, beauty and character to a rhythmic cycle. From a musical standpoint, a simple yet appropriately embellished theka serves multifold purposes, i.e. keeping time, fostering creativity of the accompanying artists, inspiring them to bring out their best, and enhancing overall aesthetic beauty of the music.
From a spiritual standpoint, a theka can be extremely meditative. Theka, when rendered repetitively at a constant (slow to medium) tempo on a well-tuned Tabla, can become an effective tool to control thought-waves (vritti), regulate breathing (prayanam), and calm the mind (chitta)- leading to a meditative state.
Here is a short demo of theka in Teentaal (16 beats), the most popular rhythmic cycle in Hindustani classical music. (Headphones recommended to hear the base (bayan))
It is incumbent on Tabla gurus/teachers to ensure that students understand and appreciate the importance of Theka, and not rush into complex and fast-paced compositions.

Rela
A short "Rela" in vilambit (slow) Teentaal (16-beats). Rela generally comprises of phrases such as tirakita, dhinagina, dhir dhir etc, which, when played at a fast speed, give a feeling of uninterrupted flow. This rela uses the phrase 'dhinagina'. Rela expands like a "Kaida", but is generally shorter than a Kaida, and ends with a tihai.

"Kaida" literally means "rule". It comprises of a main theme which is a set of aesthetically compatible phrases symmetrically divided into two segments, both segments ending with rhyming phrases such as "Dhati Dhage Tina Kina" and "Dhati Dhage Dhina Gina". The phrases in the main theme can be mathematically permutated and combined to create several poetic variations (or paltas). A Kaida challenges the Tabla player's creativity, since the rule is that the variations have to be based on the phrases in the main theme only. This is a classic example of "creativity within limitation"! The quality of variations depends on the Tabla player's creativity, gharana, and tutelage.
Here's a Kaida in Teentaal (16 beats) to give a glimpse of this wonderful poetic composition in the Tabla repertoire.

Peshkar is one of the most beautiful and creative aspects in Tabla repertoire. Peshkar, the Urdu word literally means, "to present", or "one who presents". A Tabla solo recital in Delhi, Farukhabad, Lucknow, Ajarada and Punjab gharana typically opens with a Peshkar. Just like an Alaap in vocal music, the Peshkar explores the fundamental bols and phrases of Tabla, expands them mathematically and aesthetically and ends with a Tihai or lends into a kaida.
While a Peshkar can typically be much longer, here is a short impromptu Peshkar set to 10 beats (Jhaptaal).

Posted by Rajiv S. Bhatt at 11:00 AM No comments: Links to this post 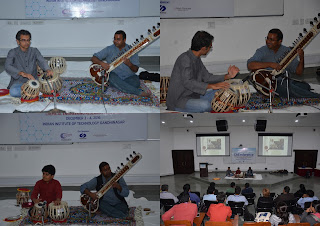 Posted by Rajiv S. Bhatt at 1:23 AM No comments: Links to this post 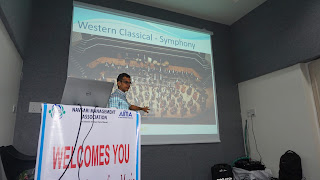 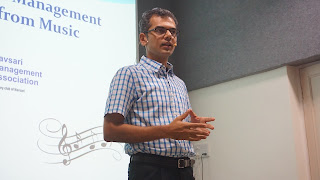 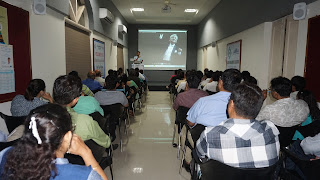 Posted by Rajiv S. Bhatt at 3:42 PM No comments: Links to this post 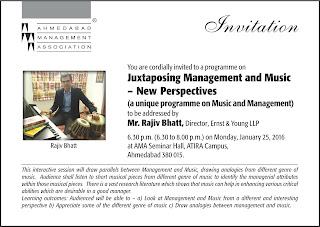 Posted by Rajiv S. Bhatt at 12:18 AM No comments: Links to this post 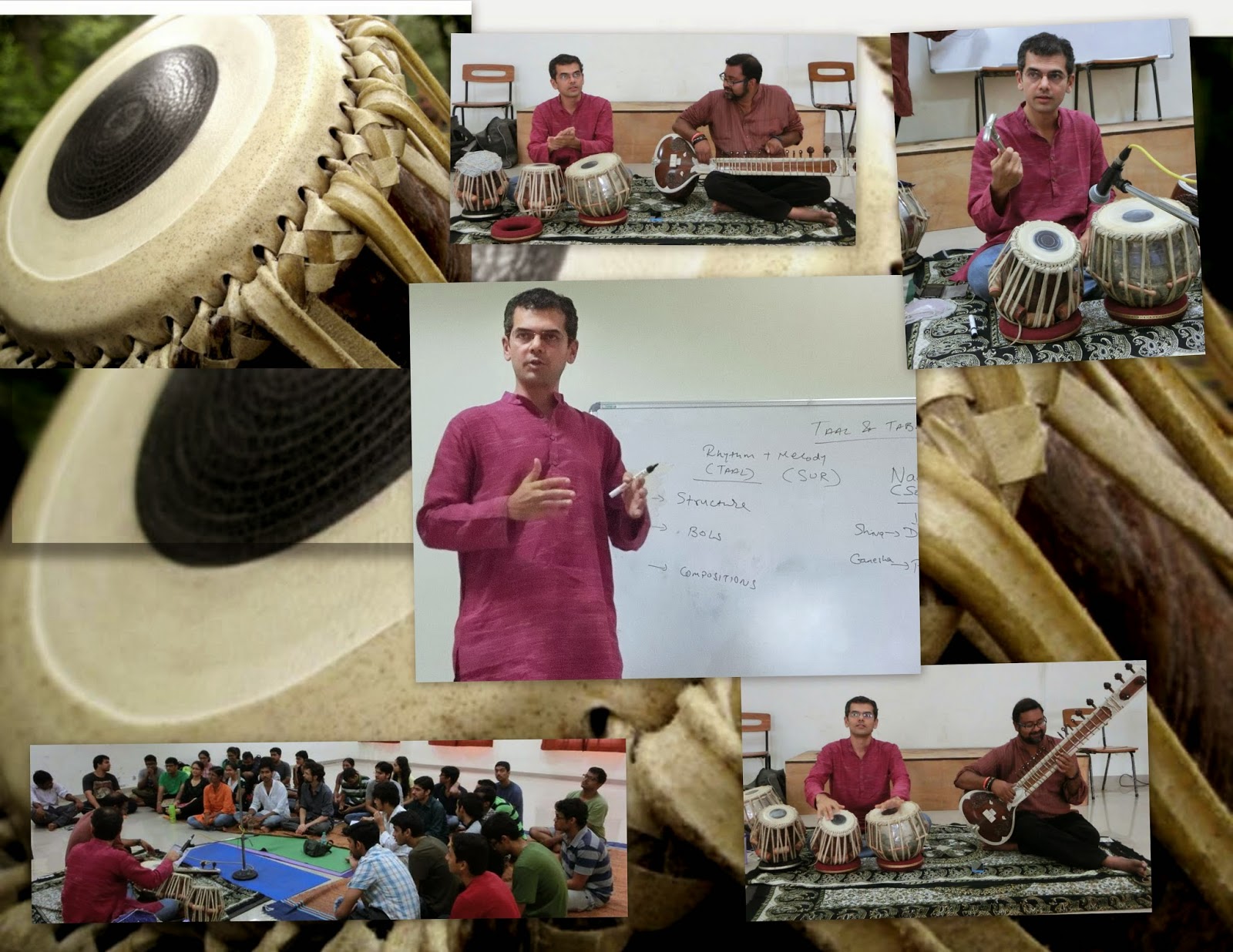 Posted by Rajiv S. Bhatt at 12:52 AM No comments: Links to this post

An article in NY Times which reinforces the benefits of music

Interesting article on Music in the New York Times:

Condoleezza Rice trained to be a concert pianist. Alan Greenspan, former chairman of the Federal Reserve, was a professional clarinet and saxophone player. The hedge fund billionaire Bruce Kovner is a pianist who took classes at Juilliard.

Multiple studies link music study to academic achievement. But what is it about serious music training that seems to correlate with outsize success in other fields? Check this link:

Posted by Rajiv S. Bhatt at 6:06 PM No comments: Links to this post

Promoting Music at IIT and Schools

Lecture-Demonstration at the Foundation Program at IIT - August 2013

An interesting interaction on Tabla with the freshers at IIT-Gandhinagar. Was glad to see the 'right' side of our future engineers! I commend IIT for including this session in their Freshers Induction program. Students had fun learning the basics of Teentaal and some of the compositions set to Teentaal. The lec-demo included discussions around evolution of Tabla, various gharanas (schools) of Tabla, Art and Science of Tabla playing, demo of compositions such as Uthan, Peshkar, Kaidas, Tukdas, Chakradaars, Gats, and Relas.The Tabla lec-demo was followed by a Sitar-Tabla duet with Srini. 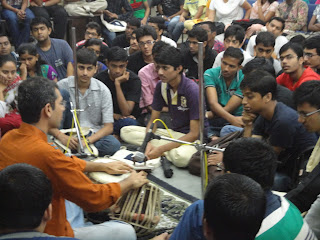 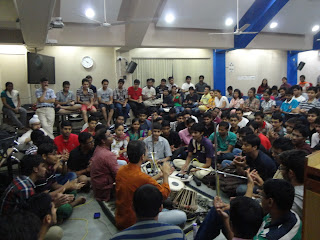 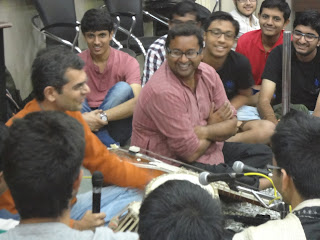 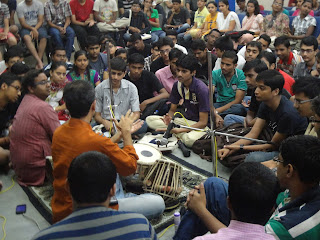 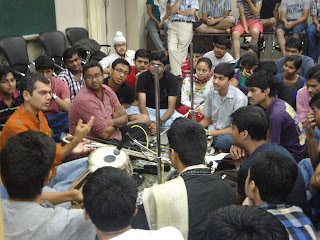 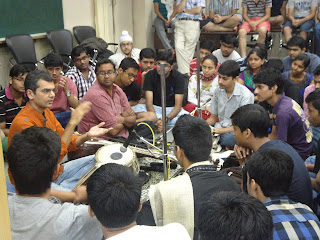 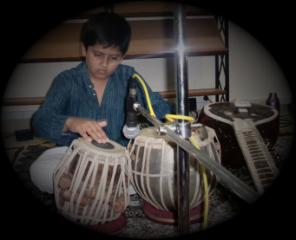 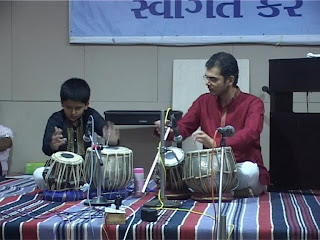 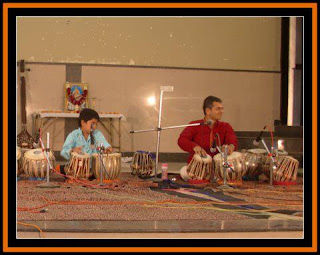 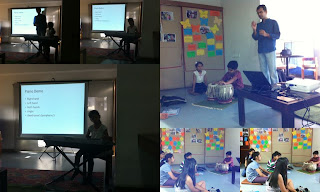 Posted by Rajiv S. Bhatt at 8:17 PM No comments: Links to this post

Appreciating Indian Music and Tabla: Session for Children and Parents

Indian Music comprises of various genres such as Classical, Semi-classical, folk, bhajans, film, popular, rock etc. While the popular, rock and other modern forms of music have been greatly influenced by Western music, the traditional Indian forms of music – classical, folk, bhajans, semi-classical (thumris, tappa, ghazals) etc continue to demonstrate the uniqueness and originality of Indian music and are today appreciated by musicians and audiences across the globe. Indian classical music, which can be broadly divided into Hindustani and Carnatic music, has a rich tradition dating back to more than 4000-5000 years.


Research has shown that music, particularly classical music, has a positive impact on the holistic development of a child. Children who start learning music at an early age tend to excel in academic, are generally more intelligent, more confident, and less disruptive.

Objective: Sensitization to some of the facets and benefits of Indian Classical Music, including Tabla

o It will highlight the benefits of music on a child’s development as well as how music can help in developing a holistic personality.

o Children would be made aware of different forms of music, musical instruments and musicians

o There would be a short Tabla demonstration explaining the history, anatomy, language of Tabla, various Gharanas, role of Tabla in today’s music, and a typical Tabla solo progression.   Session conductors: Rajiv Bhatt and Soham Bhatt
Posted by Rajiv S. Bhatt at 7:21 PM No comments: Links to this post

It was an enjoyable Tabla lecture-demo. Thanks to the Fiesta club at NIMS for inviting and organizing this event. Am impressed by the co-ordination and management skills of these 1st and 2nd year MBA students at NIMS who manage the Fiesta club. It was also fun to jam up with two guitarist amongst the management students.

Music is a great way to connect! 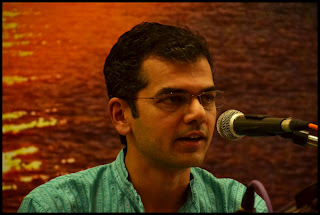 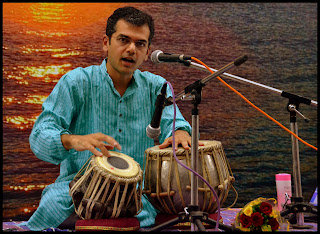 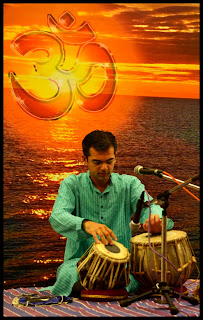 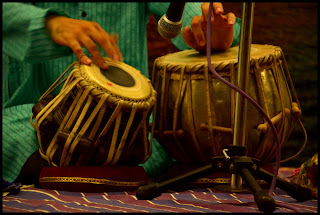 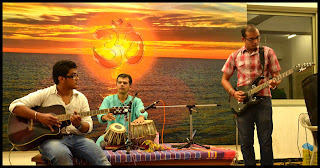 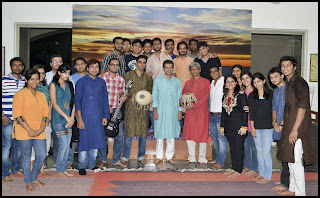 Posted by Rajiv S. Bhatt at 10:11 PM No comments: Links to this post